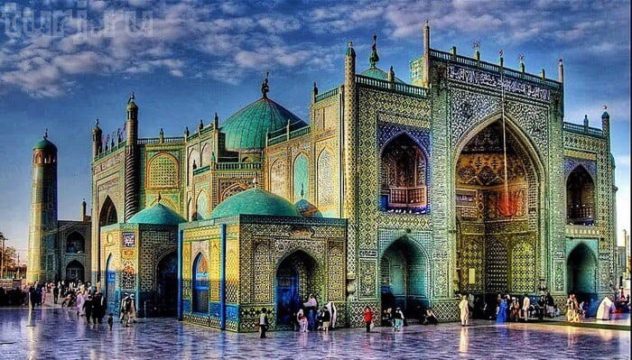 This Schools of Sanctuary online information webinar was presented by two Afghan residents in Ireland: Places of Sanctuary Ireland assistant national coordinator Homayoon Shirzad, who has been in the country for over five years, and Khatira Samim, who only arrived here in September.

They described Afghanistan in all its beauty and contradictions: an enormous, mountainous, landlocked country bordering on six countries in Asia: China, Pakistan, Iran, Turkmenistan, Uzbekistan and Tajikistan. Its political instability is graphically shown by the fact that it has had 19 different flags in the past 100 years.

Homayoon showed photos illustrating the astonishing range of different landscapes and city sites in the country: remote mountain villages, fertile valleys, dusty desert roads, ancient fortifications dating from Alexander the Great’s time (330 BC) and magnificent 15th century religious shrines. He showed the world famous Buddhist statues, carved in the 6th century, that were destroyed by the Taliban in 2001.

Afghan food is among the most exotic and sophisticated in the world, with its kebabs, pulao (spiced rice with raisins, carrots and meats) and bolani (stuffed flatbreads) particularly famous. Afghanistan is also known for its pomegranates, grapes and saffron, and for its beautiful and much-sought after woven carpets. However despite all this natural abundance, the breakdown in services and supply lines caused by the return to power of the Taliban in August means that up to a third of the 33 million population of the country faces starvation this winter, international aid agencies have warned.

Education is not easy in Afghanistan, especially for girls. Only 54% of children complete primary school and 28% secondary school. The figures for girls are much lower.

Ireland has issued 500 visas to Afghan refugees following the Taliban’s seizure of power. However it has become extraordinary difficult to leave the country. Many families are waiting anxiously to hear if they can undertake the long and often difficult journey to safety in Ireland. Others have arrived here and are now waiting in desperate hope that family members will be able to join them.

When they get here we need to provide them with accommodation, health services and education for their children. It is important that Irish teachers and students understand what their ‘newcomer’ pupils and students have gone through before coming here. Bill Doherty, deputy principal of Mount Sion Secondary School in Waterford, one of Ireland’s outstanding Schools of Sanctuary, explained how quiet and withdrawn some Afghan students arriving in his school had been.

Everything in Ireland will be new and strange to these refugee students: the language, the culture, the way schools here work, how young Irish people live. Irish schools have to think about what ‘newcomer’ families and their children need as they enter what is a very bewildering new world for them, and how teachers and fellow-students can help them to feel welcomed and integrated.

Thank you – ‘Manana’ in Pashtu or ‘Tashakor’ in Dari, Afghanistan’s two official languages.