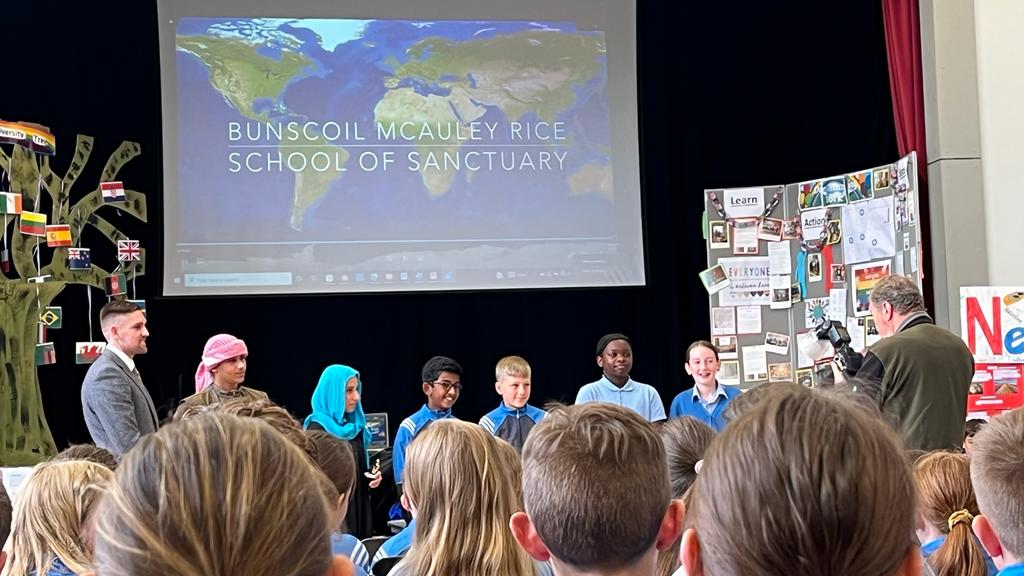 This School has become the First School in Kilkenny to be accredited as a School of Sanctuary after engaging for almost two years with the Schools of Sanctuary Network. 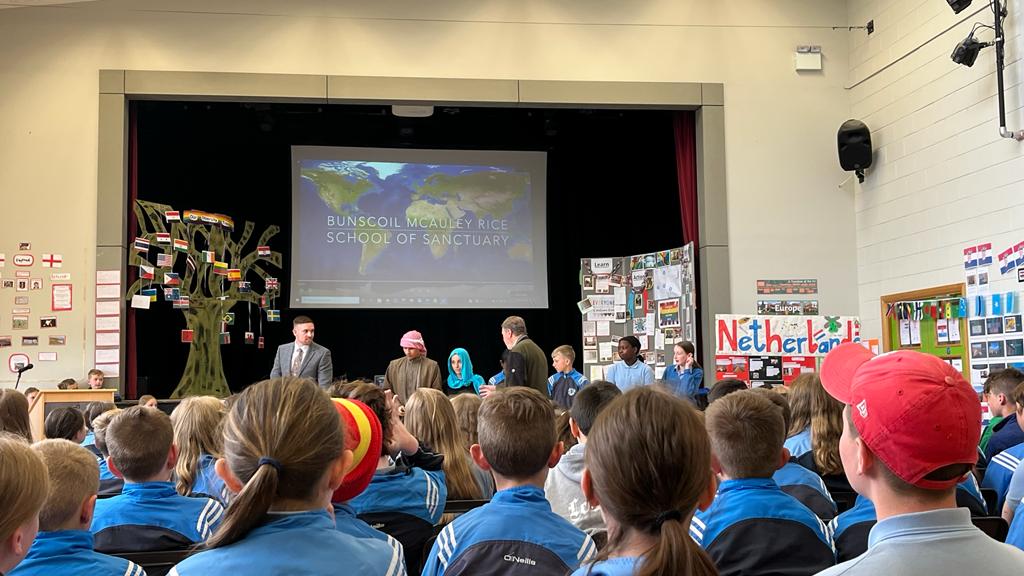 “A School of Sanctuary is a place of welcome, safety and inclusion, especially for families seeking sanctuary and who face danger in their own countries. It is a school that helps students, staff and the wider community understand what it means to seek sanctuary or refuge. The three principles of Schools of Sanctuary are 1. Learn, 2. Action and 3. Share.”

These core values were at the forefront of the Monitoring Team’s minds when the they made their way to Bunscoil McAuley Rice on Thursday 9th June 2022. Upon their arrival they were greeted by the Principal, John Moloney, who explained why he believed the School of Sanctuary initiative was such a perfect fit for his school and his gratitude to teacher Mark Kelly for taking the lead and guiding the whole school through the process.

Bunscoil McAauley Rice National School is a co-educational Edmund Rice school situated in Callan, county Kilkenny. The current school is the result of the amalgamation of the two local primary schools which, after several years of temporary accommodation on different sites across the town, moved into a brand-new school building in 2014. Mr Moloney reflected on how much the area and lived experiences of the students of Callan have changed over the 20 years he has been at the school. From a small almost semi-rural community where students very rarely travelled outside their county to the rich diversity that exists there today, where at newcomers to the area were met with openness and curiosity and also gratitude that they were bringing the world to Callan. 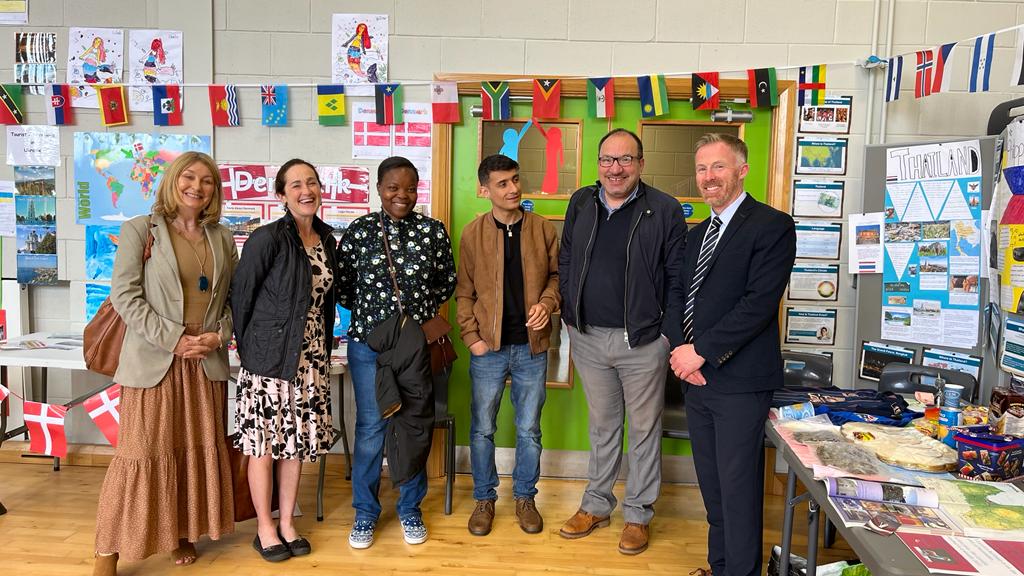 The monitoring team were  taken through to the brightly lit corridors towards the school hall, where stalls for each of the twenty-five different nationalities present in the school had been set up and 5th and 6th year students sat in the audience. Before entering the hall, the team were treated to some traditional Irish music played by the students.

Mr Moloney, standing proudly in front of the school’s Diversity Tree,  addressed the audience and thanked the teachers, parents and students for all their collective efforts in preparing for the day, which had begun back in December 2020 when the pledge formed was signed. 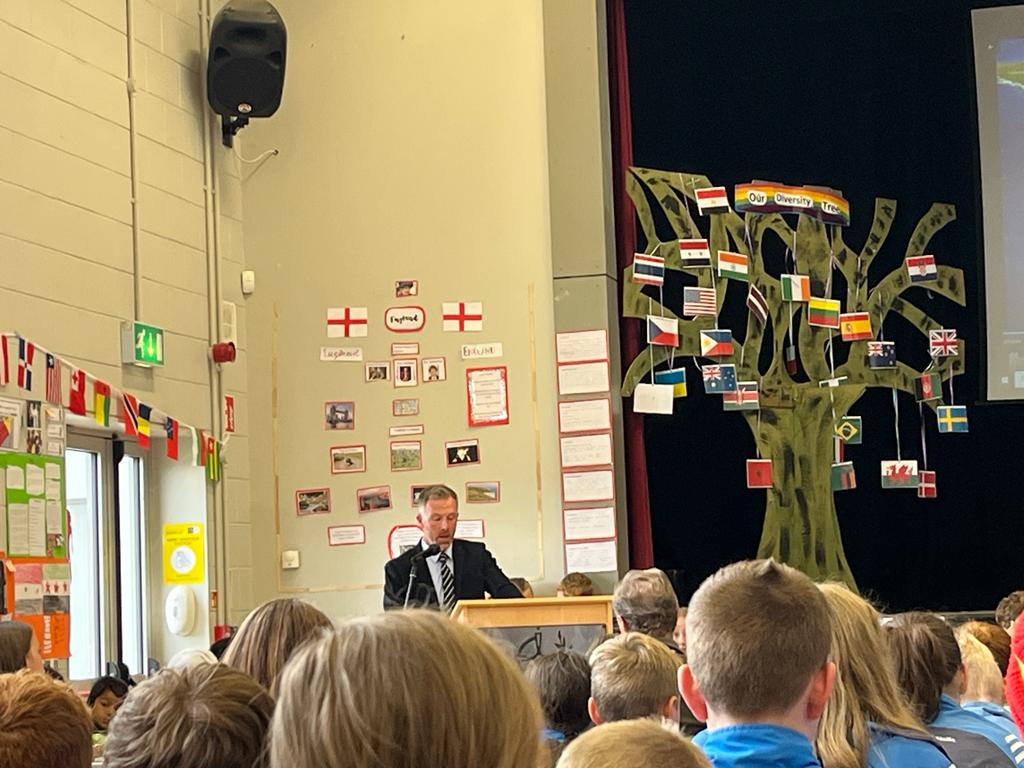 Mr. John Moloney, the Principal of Bunscoil McAuley Rice talking about the good practices of his school as a School of Sanctuary

The team watched a short video montage of their School of Sanctuary journey. They also heard from a former refugee student, Kamal from Syria about his experience of arriving in Bunscoil McAuley Rice with very little English and how he had been supported every step of the way by his peers and teachers. Then another former student, Aboud spoke very candidly and eloquently about his own person journey from Syria to Callan. Despite having very little English on arriving in Ireland, Aboud felt welcome in his new school and now four years on spoke so articulately and effortlessly to a room of over a hundred students, teachers and parents about his journey and the gratitude he feels towards Mr Moloney and Bunscoil McAuley Rice. Kamal’s and Aboud’s family members were also present in the audience and shared with one of the monitors how welcome they had been made to feel when they first arrived from Syria. They spoke of how they not only felt accepted by their new community but respected, they did not feel like strangers and felt no judgement.

Teacher Mark Kelly then presented the student School of Sanctuary ambassadors with their star trophies in recognition of their hard work and commitment to the concept of Sanctuary, completing the formal part of the proceedings. The Monitoring team were then free to explore the stalls and talk to the students, parents and teachers about their participation in the process, assisted all the time by the student team of ambassadors. Each stall was manned by students a mixture of students from the different nationalities or those who had worked on projects to create the different country displays. The team sampled incredible food from the four corners of the globe, talked to students about the best places to visit in Croatia and Brazil, talked about cricket in India and basketball in Lithuania.

Prior to the Monitoring visit to Bunscoil McAuley Rice, the team were provided with an e-portfolio which can be accessed by clicking here demonstrating how they have embedded the concepts of welcome and inclusion into the school. There they clearly outline all their actions under the Learn, Act, Share headings. There was also a stall dedicated to the Sanctuary journey in the hall, with hard copies of the portfolio and examples of the welcome pack the students had created for Arabic speaking newcomer students, the school bilingual learning packs, the bilingual dictionaries that families were given and the details of Translate Ireland, a multilingual video messaging site where they access vital information on health, services and education in 40 different languages. https://translateireland.ie/

Other examples of the many activities undertaken by the school were the creation of a new Justice and Peace Committee this year and the celebrations held in the school such as European Day. Another key student led event, was the ‘Run for Refugees’ event the students organised during Active Schools Week where each class collectively ran the same number of kilometres that Syrian refugees in the school had had to travel to reach safety in Ireland, approximately 6300km. When we passed the display in the corridor on our way to the library, Aboud spoke of how much this event had meant to him. There were more Schools of Sanctuary displays and information in the corridors and as we glimpsed into the classrooms we so world maps in each one to help children learn the locations of the countries represented by the pupils in the school.

Our last stop was the library, with its newcomer section and yet more multicultural displays.

In the library, it was a privilege to watch the peer reading project, a weekly event where older student volunteers read to younger student who need extra support. It was moving to see a 3rd class Ukrainian student, who had been in the school for three years already, reading to two infants who had only recently arrived in Ireland and how comfortable they were grabbing books from the shelves and settling down into the comfy chairs and bean bags.

You could read more about other examples of the many great activities undertaken by the school  can be found on their School portfolio .

The fact that two past pupils, who were by rights on their school holidays, came back to the school to give their talks and then walk us through the school and talk through their experiences at the school, was a real testament to the lasting impression this school has had on the lives of these students, both originally from Syria.

The Monitoring Team came together to discuss what we had experienced in Bunscoil McAuley Rice and they  best summarised that experience; warm, welcoming, inclusive, supportive and open.

Mrs. Funmi Young one of the monitor summed it up perfectly when she said “Everyone is happy to be here. It is place of sanctuary in the real sense of the word”.

The team remarked on how the relationships between the students and the staff were so clearly respectful and kind. From the smallest interaction to the formal reception, respect, openness and kindness are embedded in the culture of the school community, it runs deep in its veins. It was the team’s privilege to witness this first hand and with a big pride the team agreed  that School of Sanctuary status to awarded to Bunscoil McAuley Rice with immediate effect.  So congratulations again for all the wonderful initatives by School Management, Teachers, Students and the community in Callan. 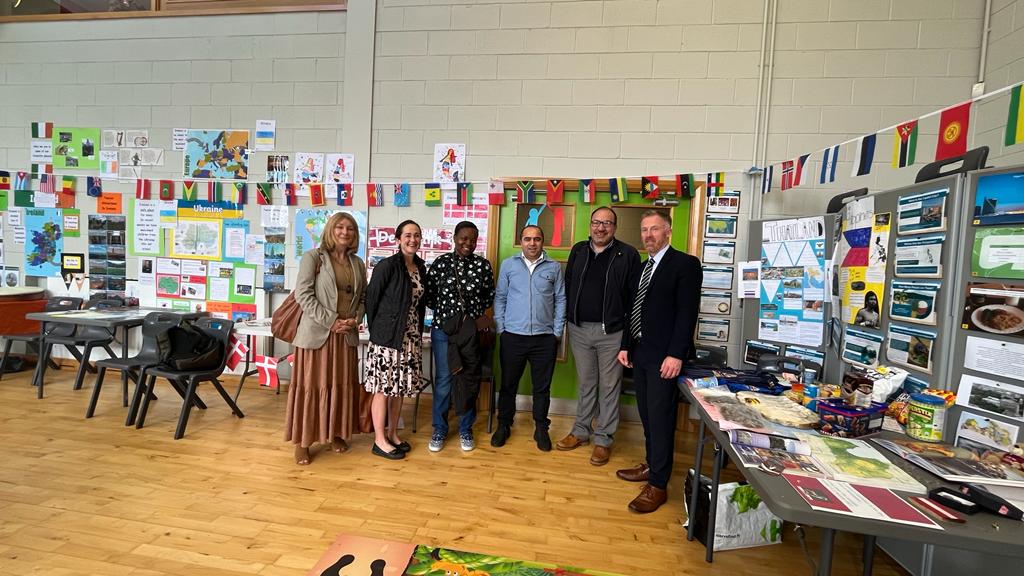 Members of the Schools of Sanctuary Monitoring Team with Mr. Moloney

Sincere thanks to the Management, staff and pupils for the warm welcome and for all the work you do to make our society a better place. Go néirí go geal libh sa todhchaí agus go raibh míle maith agaibh go léir!