SCHOOLS OF SANCTUARY IN COUNTY WEXFORD 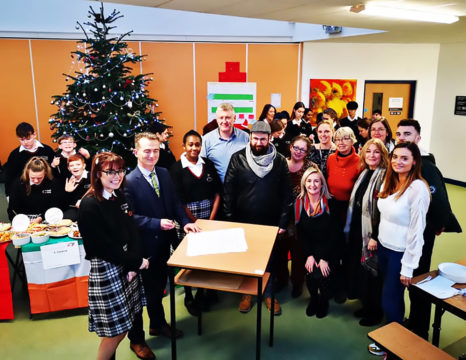 Two Gorey schools have been working on becoming Schools of Sanctuary, with Loreto School launching the campaign officially at a wonderful assembly, where all 700 pupils as well as staff, governors and parents listened with rapt attention as three residents from Direct Provision on shared their stories. Everyone in the school community has signed a pledge form and the school is buzzing with ideas.

A few days later Creagh College, one of the large secondary schools in Gorey, launched their campaign with a delicious food festival where pupils from over 20 nationalities prepared mouth-watering dishes from all over the world. It was especially heartening for children in Direct Provision to be able to try out home cooking, something they have not enjoyed for many months.

The two schools are an integral part of the growing Town of Sanctuary movement in Gorey, and both are sharing their passion across their school’s networks.