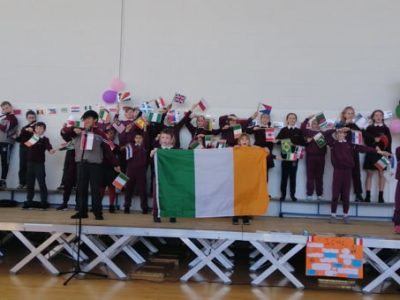 Loreto School in Gorey Co. Wexford held a ‘We Belong’ day on Wednesday 12th of February to celebrate all the cultures represented in the school.

Each country was represented by a beautiful stand, to display their customs, culture, food and a selection of interesting facts. Stands were manned by students from those countries,often wearing traditional dress.

A travel passport was issued to students to visit different country stands and record what they liked in each country.

The school music group put on a brilliant a Sanctuary performance, a song arrangement which has reached the final of Walton’s National Schools in Dublin.

The event was attended by local refugees, supporters, parents and school staff, and was another important milestone in Loreto’s journey to becoming a School of Sanctuary.