Mount Sion CBS Secondary School in Waterford has become a SCHOOL OF SANCTUARY. 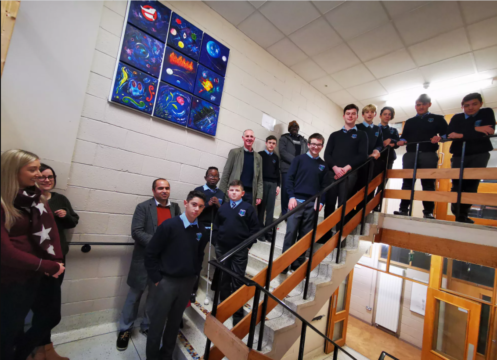 Congratulations to Mount Sion CBS Secondary School in Waterford, which has become the first school in the Republic of Ireland to be awarded the status of SCHOOL OF SANCTUARY under the newly formed national committee, and the first ever School of Sanctuary in Munster. The school was assessed by a team of monitors including people active in refugee support work, refugees and asylum seekers, and was judged to be “outstanding” in terms of its commitment and activities for welcoming and including young people from a refugee or asylum-seeking background. A few days later, it was followed by the equally impressive Bunscoil Loreto, a Primary School in Gorey that is pioneering this all-important message of sanctuary for all.

PoSI team leader Andy Pollak, a former Irish Times education and religious affairs correspondent, said: “Mount Sion is a model for other schools with its outstanding portfolio of work to welcome and support the young men and boys from 37 different nationalities who are students in its school. We were enormously impressed by its wide range of initiatives: providing multi-lingual and multicultural flags, signs, booklets and graphics throughout the school; ‘own language’ tours for students and parents; celebrating religious festivals from the various countries; setting up a ‘sanctuary room’ for reflection, counselling and discussion; inviting asylum seekers in to give talks; students making videos of their sanctuary activities and sharing these activities with other schools.
“Through this wide range of welcoming activities, Mount Sion is providing a shining example to other Irish schools by offering refuge to those many young people who need it and equipping its students with intercultural skills and the ability to have compassion in what is, for many, a turbulent world”, said Mr Pollak.
See link below to Mount Sion’s School of Sanctuary portfolio:
https://padlet.com/narrellbyrne/mountsioncbsschoolofsanctuaryportfolio

Mt Sion now joins Bunscoil Loreto, Gorey, which was also awarded in December. Three schools in Monaghan and over 40 in Northern Ireland have also become Schools of Sanctuary, and many more in over 10 counties are on the journey to recognition.