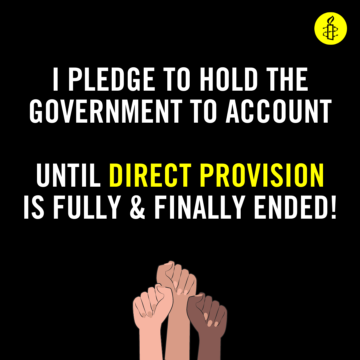 Amnesty International Ireland is running a social media campaign today Tuesday 10 August as part of their campaign to End Direct Provision.
Today 10 August, we’re asking people and organisations to sign up to and help us share the Pledge to End Direct Provision. The Pledge is an important way to show the Government and all politicians that, no matter what happens on the political landscape, people in Ireland will not give up until the inhumane Direct Provision system is truly over. You can find out more about the Pledge here: amnesty.ie/end-direct-provision-pledge/
Despite commitments from the Government to end Direct Provision, this cruel system has continued through 21 years of successive governments
The social media campaign as part of the Pledge to End Direct Provision will be running from 10am onwards.
Amnesty is asking individuals, groups and organisations to do the following:
1. Share the attached graphic on their social media channels today Tuesday 10 August after 10am, along with a message similar to the below sample social media posts, and
2. Tag Amnesty Ireland (Twitter: @amnestyireland; Facebook: @amnestyinternationalireland; Instagram: @amnestyireland) and Minister O’Gorman (Twitter: @rodericogorman; Facebook: @RodericOG; Instagram: @rodericogorman).
Sample social media posts:
Post 1:
Join the Pledge to #EndDirectProvision! Your voice is powerful – tell the Government you won’t give up until this cruel system finally ends! I’ve signed, will you? https://www.amnesty.ie/end-direct-provision-pledge/ @amnestyireland @rodericogorman

Post 2:
Join the pledge to #EndDirectProvision! Help us show the Government just how many people in Ireland will continue to hold them to account until this inhumane system is truly over. https://www.amnesty.ie/end-direct-provision-pledge/ @amnestyireland @rodericogorman