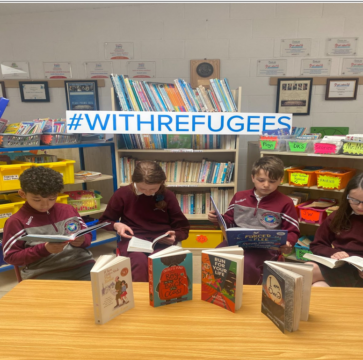 On Monday the 16th of May, Bunscoil Loreto, Ireland’s first Primary School of Sanctuary, was delighted to host the launch of the Book Reading Campaign by UNHCR with our 5th classes. Jody and Aoife from UNCHR spoke to the children about the life of refugees. Tiffy Allen Co-ordinator of Places of Sanctuary Ireland spoke about Schools of Sanctuary and two School of Sanctuary Ambassadors Olga and Ahmad spoke about their lives since they had to flee their home countries and seek sanctuary in Ireland. We were delighted to be also joined by Elaina Ryan, the CEO of Children’s Books Ireland who spoke to the children about the importance of reading and the joy it brings to us all. It was a wonderful experience for all involved. 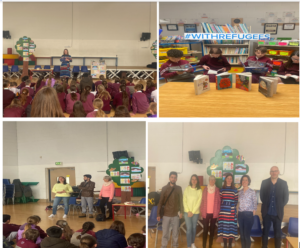 Having lived in a cave most of his life, Aman and his mother set off on a journey to England, where he hopes to seek asylum. However, things are not nearly as simple as they would hope, and with the police and the Taliban on their tails all the while, Aman and his mother find love and joy in a newfound friend – a dog named Shadow.

This book does a wonderful job of describing the tragedies and difficulties of living in Afghanistan during this time in a heart-breaking and poetic fashion, while still providing a thoroughly enjoyable read for children. I feel it describes the hardship of being an asylum seeker in a foreign country excellently, while also providing a character who is easily related to. All in all, I would definitely recommend this book to people of all ages looking to educate themselves on the conditions in Afghanistan and how it affects the Afghan people.

Review of ‘I Am David’ by Anne Holm
I read “I Am David” about 2 weeks ago and I really loved it. It was very realistic and enjoyable. It describes every scene really well and I liked reading about all the lovely places David went and his life as a refugee
David is on the run and does not know who to trust – anyone could be “one of them”. David knows many languages but is not used to talking to and being around people. The book is from David’s point of view and I found that he is very different to me but at the same time we have some things in common. David is different to me because he has pretty much nothing – no house, no family, no friends and he is constantly on the run, while I have a house, a big family, lots of friends and know where I live and should stay. Aside from these differences we are both human and just want to be loved, to be safe and if we have these things we want to keep them.
David has to survive with what he has and if he does not have it he has to find it. All David wants is to be free but for that to happen he has to get into a free country and before that he has to get out of the one he is in. David believes in God and relies on him in times of need. David’s story is amazing but it can be sad, especially the fact that he has nowhere to go and has to hope that people will be kind enough to give him some food. I think that nobody should have to live like that – to be constantly in fear and that refugees should get the help they deserve.
By Sadhbh Dempsey, 5th Class, Bunscoil Loreto, Gorey.